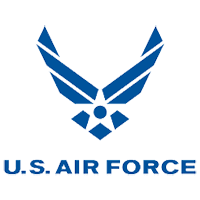 Here at service medals and ribbons we have a large selection of Air Force military medals.

Because, the United States Air Force became a separate military service on 18 September 1947 with the implementation of the National Security Act of 1947. Rather the Act created the National Military Establishment, later renamed the United States Department of Defense, consequently which was composed of four of the five branches, as a result the Army, Marine Corps, Navy, and a newly created Air Force.  Prior to 1947, due to the responsibility for military aviation was divided between the Army for land-based operations and certainly the Navy and Marine Corps for sea-based operations from aircraft carrier and above all  amphibious aircraft. In Conclusion, the Army created the first antecedent of  the Air Force on 1 August 1907, which through a succession of changes of organization, titles, and missions advanced toward eventual separation 40 years later.  As a result the predecessor organizations leading up to today’s U.S. Air Force are:

Hence, it continued to exist as a branch of the Army (similar to the infantry, quartermaster, or artillery) until reorganization provisions of the National Security Act of 1947 (61 Stat. 495), 26 July 1947.

Because the Transfer Order 1 was the first of 200 Army-Air Force transfer agreements drawn up in June and July 1947, and ordered the transfer of all military and similarly  civilian personnel of the Army Air Forces to the Department of the Air Force and the USAF.  The final transfer order was signed 22 June 1949.

Service medals offers our customers a large selection of air force patches from the Vietnam War Era (November 1, 1955 – April 30, 1975.)  Our patches are authentic from the era.

Finally, Service medals also has a great selection of air force surplus items and memorabilia.  Furthermore our military experts can help you find the items you are looking for!