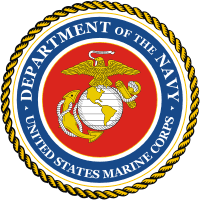 Marine Corps Medals.  Here at service medals and ribbons we have a large selection of military medals.

The history of the United States Marine Corps (USMC) begins with the founding of the Continental Marines on 10 November 1775 to conduct ship-to-ship fighting, provide shipboard security and discipline enforcement, and assist in landing forces. Its mission evolved with changing military doctrine and foreign policy of the United States. Owing to the availability of Marine forces at sea, the United States Marine Corps has served in nearly every conflict in United States history. It attained prominence when its theories and practice of amphibious warfare proved prescient, and ultimately formed a cornerstone of the Pacific Theater of World War II. By the early 20th century, the Marine Corps would become one of the dominant theorists and practitioners of amphibious warfare. Its ability to rapidly respond on short notice to expeditionary crises has made and continues to make it an important tool for U.S. foreign policy.

Hence In February 1776, the Continental Marines embarked on their maiden expedition.  The Continental Marines were disbanded at the end of the war, along with the Continental Navy.  In preparation for the Quasi-War with France, Congress created the United States Navy and the Marine Corps. The Marines’ most famous action of this period occurred in the First Barbary War (1801–1805) against the Barbary pirates. In the Mexican–American War (1846–1848), the Marines made their famed assault on Chapultepec Palace.  Therefore it overlooked Mexico City, their first major expeditionary venture. In the 1850s, the Marines would see service in Panama, and in Asia. The Marine Corps played only a minor role after their breaking ranks and causing the collapse of the Union Line at the first battle of Manassas.

In conclusion, During the U.S. Civil War their most important task was blockade duty and other ship-board battles.  They were mobilized for a handful of operations as the war progressed. The remainder of the 19th century would be a period of declining strength and introspection about the mission of the Marine Corps. Under Commandant Jacob Zeilin’s term (1864–1876), many Marine customs and traditions took shape. During the Spanish–American War (1898), Marines would lead U.S. forces ashore in the Philippines, Cuba, and Puerto Rico.  Because they demonstrating their readiness for deployment. Between 1900 and 1916, the Marine Corps continued its record of participation in foreign expeditions.  Especially in the Caribbean and Central and South America, which included Panama, Cuba, Veracruz, Haiti, Santo Domingo, and Nicaragua.