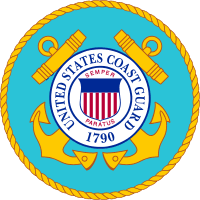 Coast Guard Medals.  Here at service medals and ribbons we have a large selection of military medals.

Because it’s roots go back to the early days of the Republic. Secretary of the Treasury Alexander Hamilton lobbied Congress to authorize a small fleet of vessels to enforce tariffs. On 4 August 1790 (now recognized as the Coast Guard’s official birthday).  Congress passed the Tariff Act, permitting the construction of ten cutters and the recruitment of 100 revenue officers.  These “revenue cutters” were the country’s only naval force.

The school therefore, provided a two-year premise to ship supplemented by some class work and tutoring in technical subjects.  In 1906, an engineering program for cadets began. Nevertheless, the school remained small, with 5 to 10 cadets per class. In 1914 the School became the Revenue Cutter Academy and with the merger of the Revenue Cutter Service and the Life Saving Service in 1915, it became the United States Coast Guard Academy.