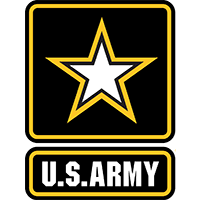 Army Medals.  Here at service medals and ribbons we have a large selection of army and military medals.

First of all, it began in 1775. As a result the United States Army has been the primary land based part of the United States Armed Forces. Because the Army’s main responsibility has been in fighting land battles and military occupation. The Corps of Engineers has a major role in controlling rivers inside the United States.  In 1947, the Air Force became completely independent of the Army Air Forces. The Army was under the control of the War Department until 1947, and since then the Defense Department.

began in April 1775, the colonial revolutionaries did not have an army. Previously, each colony had relied upon the militia, made up of part-time civilian-soldiers. The initial orders from Congress authorized ten companies of riflemen. The first full regiment of Regular Army infantry, the 3rd Infantry Regiment, was not formed until June 1784.  After the war, the Continental Army was quickly disbanded because of the American distrust of standing armies, and irregular state militias became the new nation’s sole ground army, with the exception of a regiment to guard the Western Frontier and one battery of artillery guarding West Point’s arsenal.

An invasion of Canada failed, and U.S. troops were unable to stop the British from burning the new capital of Washington, D.C.. However, the Regular Army, hence under Generals Winfield Scott and Jacob Brown, proved they were professional and capable of defeating a major invasion by the regular British Army in the Niagara campaign of 1814. Between 1815 and 1860, the main role of the U.S. Army was fighting Native Americans in the West in the American Indian Wars, and manning coast artillery stations at major ports. The U.S. used regular units and many volunteer units in the Mexican–American War of 1846–48. At the outset of the American Civil War, the regular U.S. Army was small and generally assigned to defend the nation’s frontiers from attacks by Indians. Following the Civil War, the U.S. Army fought more wars with Indians, who resisted U.S. expansion into the center of the continent.

in conclusion, set the stage for the ideological confrontation known as the Cold War. With the outbreak of the Korean War, concerns over the defense of Western Europe led to the establishment of NATO. During the Cold War, American troops and their allies fought communist forces in Korea and Vietnam.  The 1980s was mostly a decade of reorganization. The Army converted to an all-volunteer force with greater emphasis on training and technology. By 1989, the Cold War was nearing its conclusion. The Army leadership reacted by starting to plan for a reduction in strength. After Desert Storm, the Army did not see major combat operations for the remainder of the 1990s. After the September 11 attacks, and as part of the War on Terror, U.S. and other NATO forces invaded Afghanistan in 2001, replacing the Taliban government. The Army took part in the U.S. and allied 2003 invasion of Iraq.

Finally, Service medals also has a great selection of air force surplus items and memorabilia.  Furthermore our military experts can help you find the items you are looking for!